In his latest work ("Brilliant Green," Michael Pollan, 2015), Stefano Mancuso says “The most recent studies in the plant world have shown that plants are sensitive (and therefore have senses), that they communicate (with each other and with animals), sleep, remember, and can even manipulate other species. They can be described as intelligent.”

The specialist in plant signaling and behavior also adds “Plants do not have neurons or a brain, that is true, but this does not in any way mean that they are incapable of calculation, learning, memory or even sensitivity. Such sophisticated behaviors can only be described as intelligent.”

The ability to memorize is thus an integral part of plant intelligence, which various specialists have outlined.

What do we mean by memory? According to Michel Thellier, professor emeritus from the University of Rouen, it is the “possibility for a signal to be stored for a certain period of time and that, under certain circumstances, be recalled by another signal.”

The leaves of the sensitive plant (Mimosa pudica L.) fold up instantly when they are touched or when the potted plant is lifted up suddenly. On the other hand, if the movement of the pot is repeated several times, the foliar response gradually decreases and finally disappears, although the plant continues to close up its leaves when they are touched. The mimosa has therefore remembered that being lifted up is not dangerous. It has been established that the sensitive plant retains information for around 40 days [Gagliano 2014].

When a breeze bends the branches of the aspen (Populus tremula L.), a previously inactive gene is expressed after 30 minutes in reaction to the stress produced. If the wind bends the branches again for several days in a row, the gene stops being expressed for almost a week. The tree has therefore recorded that the effect of the wind does not threaten its survival. This is a phenomenon of habituation [Martin 2010].

Plant memory, in contrast to ours, is not that of facts, such as environmental stimulation (cold snap, insect bite), but that of the type of reaction to be adopted (production of tannins, folding of leaves, etc.).

Frantisek Baluska from Bonn University (Germany), co-founder with S. Mancuso of the “Society of Plant Signaling and Behavior,” emphasizes “what is important, is that most of the molecules responsible for communication and neuronal activities in the human brain are also present in plants, with very similar functions. The process is very similar and implies in a way that plants also have processes for information, memory, decisions and problem solving.”

Francis Hallé states as a warning to gardeners that it is not a “memory or type of learning comparable to ours. A plant that you do not water very often, for example, will be used to living in dry conditions. It “remembers.” On the other hand, if you water it a lot, well, the day you don’t water it any more, it dies. Because the plant also relies on what happened to it on previous occasions.”

This memory is generally activated with the expression of a previously inactive gene. “Genes can be chemically modified by environmental factors such as stress, and these epigenetic changes may in some cases be passed on to the next generation. This sensitivity of the genome is surprising and we are only just beginning to explore the impact of epigenetic control of plant development” explains Lincoln Taiz, professor emeritus at the University of California.

Where is the “brain of a plant”?

S. Mancuso points out that “plants are able to produce and emit electrical signals through all the cells of their bodies. From this point of view, there is a sort of diffuse brain, while in animals everything is concentrated in a single organ.”

Nevertheless, like Charles Darwin who, in 1880 in his work “The Power of Movement in Plants”, compared the action of roots to that of the animal brain, proponents of neurobiology have often concentrated their research on roots [Baluska 2009].

Indeed, authors favor the root system, a location of significant electrical (electrical impulses) and chemical activity and, more specifically, an area that is only a few millimeters long at the tip of each radicle called the “transitional zone” [Baluska 2004]. With a “very high sensitivity to environmental stimuli” [Baluska 2013], the apices of the roots are where the integration of all the information received takes place. Did C. Darwin not write that “the tip of a radicle acts like the brain of inferior animals.” As the integration centers of all the roots are interconnected (because all the roots converge), they function as a network. Even though they are rudimentary and small in size, their number (millions) enables them to act as a decentralized brain.

Faced with skepticism from part of the scientific community, the advocates of plant neurobiology respond with reference to a situation that happened almost a hundred years ago “It is a matter of time. When plant biologists talked about hormones; the fact that plants have hormones, which was unthinkable at the time, is openly accepted today.”

A documentary broadcast in 2012 on ARTE (52 minutes) “The Spirit of Plants” is a beautiful extension of this. 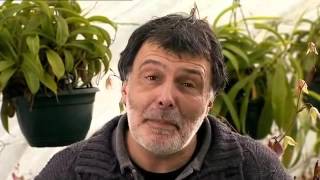